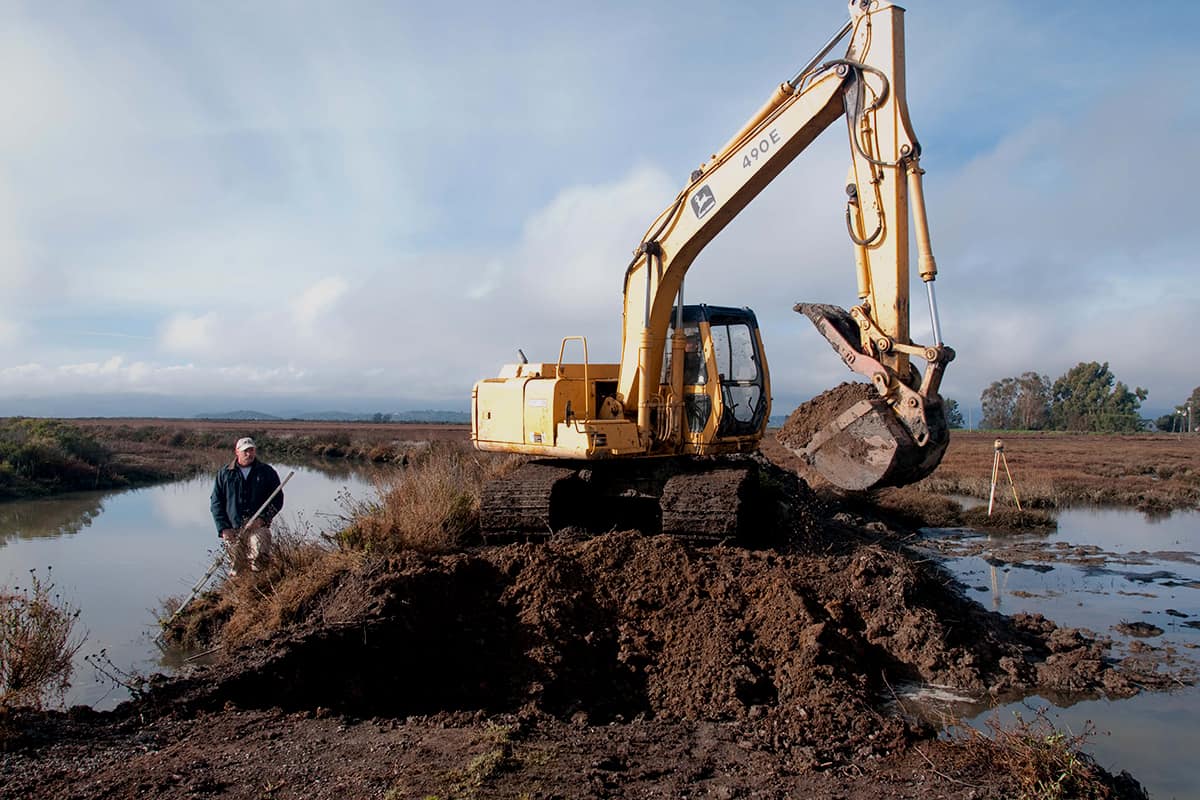 On Sunday October 25, 2015 Sonoma Land Trust breached a levee along the north edge of San Francisco Bay at Sears Point Ranch. The 285-foot-wide breach allowed salt water to fill a recently constructed 1,000-acre tidal marsh basin for the first time in over a century.

The area is located midway along Highway 37 between Novato and Mare Island and is part of the San Pablo Bay National Wildlife Refuge. Tens of thousands of shorebirds and waterfowl enjoy its mudflats and channels, as do bat rays, leopard sharks, seals and the occasional misguided salmon. Thanks to the incorporation of a 2.5-mile section of the Bay Trail as part of the restoration design, thousands of visitors have also been able to walk atop new habitat levees.

Overall, the site is developing as hoped with surprisingly rapid sediment accretion in the first five years. Challenges do exist, however, and the gently sloping habitat levee has experienced significant wind wave erosion in advance of vegetation establishment.

The 5:42 minute video above by Land Trust staffer Corby Hines provides an up-close glimpse of the breach event and explains the adaptive management project at Sears Point.

In 2021, SLT worked with a team of ecologists and engineers to plan and implement an adaptive management plan that used a nature-based solution to stem the erosion while rebuilding the habitat levee edge. The project used hundreds of salvaged logs, thousands of cubic yards of strategically placed dried bay mud and gravel, and thousands of tidal wetland and transition zone plants to rebuild the toe of the habitat levee and resist future erosion. The project harnesses the natural energy of wind driven waves to suspend and redeposit placed bay mud to form swash bars for plant colonization. The logs, mimicking treefall that historically washed into the bay from the Sierra a century ago, serve to dissipate much of the wave energy while the gravel provides an early hand in stabilizing the freshly graded scarp along the levee shoreline.

The project is unique in the San Francisco Bay. SLT and its designers are hopeful that it can serve as a model for rebuilding eroding shorelines in similar settings by working with natural processes and natural materials.

On June 6, Joint Venture partners gathered to celebrate the start of construction on the 2,327 acre property known as Sears Point. After nearly 10 years of planning and raising close to 18 million dollars, Sonoma Land Trust and project partner Ducks Unlimited will prepare approximately 960 acres of diked agricultural baylands for the reintroduction of tidal action. The land along Highway 37 almost became a casino resort, but instead was purchased by Sonoma Land Trust in 2005 and soon enough, after more than a century of isolation, it will become reconnected to San Pablo Bay.

An unintended consequence of reclaiming the marshes was that the peaty soils, exposed after millennia underwater, decomposed and caused the land to sink. Now below sea level and with sea levels rising, SLT, DU and others have incorporated innovative designs features to accrete sediment, including marsh mounds scattered randomly and purposefully throughout the future tidal basin which will block wind erosion and attract sediment for plants to establish themselves. A new 2.5 mile levee needed to protect Highway 37 and the railroad will be built in a way such as to also create habitat and refuge for marsh wildlife. According to Juilan Meisler, SLT Baylands program manager, “the site will [also] become Sonoma County’s premier access point to the Bay” with the addition of 3.5 miles of new trails, including a 2.5 mile segment of the San Francisco Bay Trail.

For more information on the project, or to read more news coverage of the breach event visit the Sonoma Land Trust website or contact Julian Meisler, Baylands Program Manager.